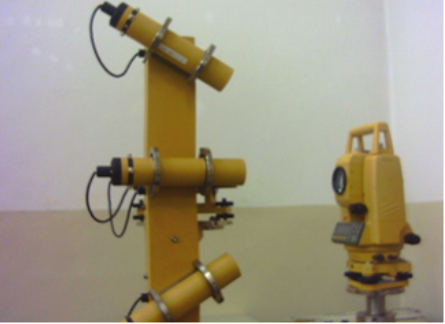 Metrological assurance system cannot be imagined without well organized and equipped geodetic laboratory. Metrology laboratory of the Institute for Geodesy and Geoinformatics is the first laboratory on this territory that has been and still does perform aligning with original measures of all geodetic measuring equipment – instruments, poles, bands…

Metrology laboratory had started to operate on January 21st, 1985, right after the Law on measuring units and equipment from 1984 had been legislated. This Law for the first time deals with the issue of examining of geodetic measuring equipment - instruments.

The resolution on accreditation of laboratory appoints the head and deputy head of the laboratory and three members of laboratory. All laboratory members posses the necessary experience in the area of metrology and they had all passed test of knowledge of metrology regulations, performed by the professional commission of the Authority for measures and precious metals before accreditation. According to the law provisions, all measures that can be controlled in metrology lab were listed in the resolution: leveling equipment, theodolites, distancemeters (optical, electro-optical and laser), total stations, all kinds of GPS receivers and measuring equipment for which only this laboratory is accredited: bands, leveling poles (regular and precise). Since the beginning of work of the accredited laboratory, approximately 300 different types of measuring equipment had been examined per year.

Within the previous work of Metrology laboratory, comparing and examination methods had been developed for geodetic measuring equipment, as well as the analysis of the method with accuracy evaluation. Problem of metrology of angles, distances and other measures that appears during geodetic measuring is being dealt with by the team of experts with university education and scientific level of Master of Science and Philosophy doctor.

Specific for metrology assurance of geodetic instruments and tools is that, besides laboratory, it requires field examinations on standard-of-measure bases and test networks. Working polygon for metrology examination consists of:

! Optimized for Firefox, Chrome and IE 9+